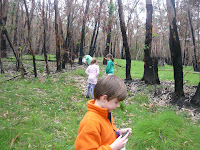 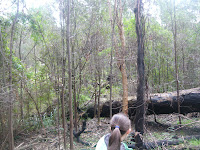 A (Slightly) Free Range Birthday
Alice decided that this year her birthday was to be a Day in the Forest. So we borrowed a big car and took a handful of friends to the Ferntree Gully National Park.

First we had a scavenger hunt and some exploring... 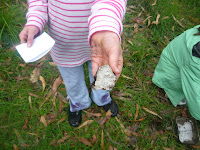 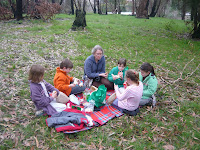 ... followed by cake and pinata at Alice's grandparents' house (conveniently located just up the hill). 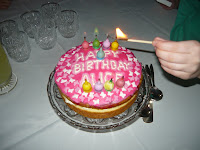 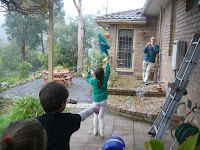 Afterwards, we had intended to visit William Ricketts' Sanctuary, but it began to rain, so we took them for milkshakes in the village instead, and then gave them 50 cents each to spend on a knickknack stall at the weekend market... 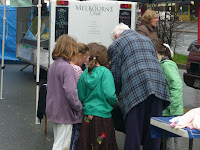 And the next day, we got Rex! 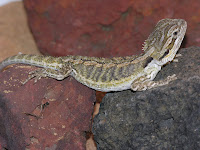 Best. Birthday. Ever.
Posted by A latte beckons at 9:16 AM 2 comments: 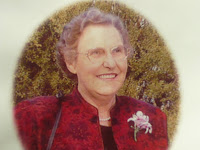 Betty Collins was one of the loveliest women I have ever known. Unfailingly kind, generous and positive, she was the kind of person who made you feel better just by walking into the room. She trained and worked as a pharmacist in an era where such a career was extremely unusual for a woman. She faced many hardships, including the sudden death of one husband and the slow decline of another, with faith, cheerfulness and courage. She was a dearly loved mother, grandmother and great-grandmother, and a loving and thoughtful friend to many. She died last week on her 81st birthday.

She was the mother of my friend David, and Michael's friend Marg. If not for Betty, Michael and I would never have met, so I have particular reason to be grateful to her. But I'm also grateful just for having known her. Thank you, Betty.
Posted by A latte beckons at 10:45 AM No comments: 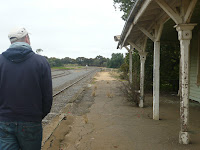 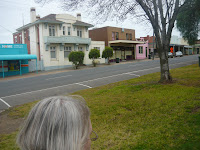 The top of my head, with the main street as backdrop. 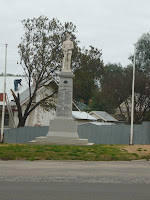 The all important war memorial. This one, unusually, lists only those soldiers killed in conflict, not all those who served. Those names are listed beneath a mural on the wall of the RSL building down the hill. 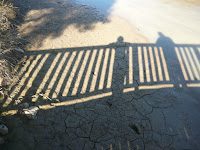 Cracked mud under a bridge over the creek. This shot turned out a lot more arty than I'd intended! 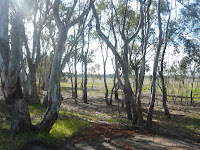 Trees near Little Boort Lake. We walked all the way around it. Twice. There's not a lot to do in Boort on a Saturday afternoon when there's no footy on... 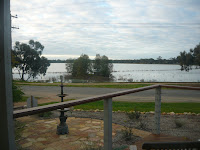 View of the lake from the window of our B&B. It was so peaceful, we could hear frogs croaking all night. And there were birds everywhere - swans and ducks and galahs and cockatoos and wrens - there were lots of others but I didn't know their names. And of course there were crows... 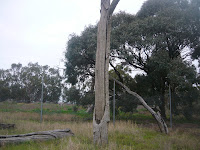 One of the many scarred trees by the lake. Boort was once an Aboriginal meeting place, and the people would remove long scoops of bark from the trees to make canoes, shields, containers and baby-carriers. Boort means 'smoke on the hill' - a signal for meeting, perhaps. 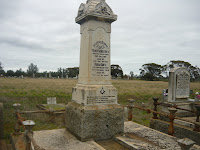 We made a visit to the cemetery, too. Mikey searched for fallen diggers, and found a few. Lucky we didn't bring the girls, I don't think they find old country cemeteries as fascinating as we do. 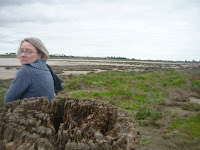 We also investigated a 'dry' lake that wasn't as dry as it was supposed to be. We spent the next three hours scraping mud off our shoes.

So why did we drive for three and a half hours to spend a night in beautiful, historic, isolated Boort? You'll have to wait and see...
Posted by A latte beckons at 9:45 AM 1 comment:

Cicada Summer has been shortlisted for the 2010 Prime Minister's Literary Awards, the first time children's and young adult fiction has been included. You can find the full lists here.

The shortlists were announced yesterday at Readings bookshop in Carlton, by the (extremely tall) Minister for the Arts (and lots of other things) Peter Garrett. That's me in the front, fitting snugly under the Minister's armpit.

It's such a tremendous honour to be included in lists featuring such kid- and YA-lit luminaries, but most of all I am pleased for Cicada Summer itself, if that makes sense. Though it touches on big themes (grief and loss, family and friendship, growth and change and trust), Cicada Summer is in some ways such a small shy book that I was always a little worried it might be overshadowed by flashier, noisier stories. It's like seeing your quiet, introverted child being led out onto the dance floor to glow, just for a moment, in the spotlight.
Posted by A latte beckons at 12:00 PM 2 comments:

When I came across Chicks Dig Time Lords (via Lizbee's blog -- see, good things do come from googling oneself...) I knew I had to have it. This is a book about me, I thought. And lo, I sent away for it, and it hath arriveth, and I hath eagerly read it.

And discovered, no, it isn't about me after all. This is overwhelmingly a book about Fans of Doctor Who. And I've realised that I am a mere fan, not a fangirl. Squees and shipping and zines and cons and New Adventures have never been part of my experience of adoring Doctor Who; my long and loving relationship with the show has lived behind closed doors, inside my mind, and for the most part, secretly. I never felt that need to share my devotion -- only once, at high school, with one other friend, did I reveal the true extent of my secret life (hello FE, if you're out there).

Because my love has been solitary rather than communal, is it any less real? The mythology of the Doctor has been part of my identity since I was thirteen. I know I'm not the only person who's imagined their own version of the Doctor's story. I never identified with the Doctor myself, or with any particular companion, but invented my own companion and constructed an elaborate story arc around her.*

My high school friend and I referred to our secret life as "etcetera." Etcetera was extra, a parallel existence. The closest I came to fanfic was writing about Calwyn and Darrow's relationship in the Tremaris books. Yes, there was a little pinch of the Doctor in Darrow, and a little smidge of "her" in Calwyn, though they soon developed their own independent lives.

So I guess I'm not a true fan, even though the world of the Doctor is such a part of my own history; I must be something else, something less, something merely partial. A borrower, a visitor in another's world. I've knitted my own scarf out of the Doctor's wool; but it still keeps me warm.

And hey, the TARDIS is a big place. There's plenty of room for all of us.


*Yes, her -- not me, not exactly. She was a princess, for a start, and from another planet. She didn't have my name. And she'd mastered temporal mechanics and developed her own means of time/space transport. In fact the more I think about it the more I realise she was modelled on Romana -- an equal, not a hanger-on, not a damsel in distress. And her adventures weren't restricted to travelling with the Doctor (though he was certainly a handy way of accessing other worlds).
Posted by A latte beckons at 4:04 PM 1 comment:

On the Irresistibility of Sand and Water

So we went to the beach.

We were invited for a couple of days to a friend's family beach house at Jan Juc, and I forgot to bring a camera. But we went to the same beach at the same time last year, and once again the three girls were drawn to the magic combination of running water, wet sand, stones and sticks. 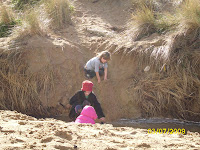 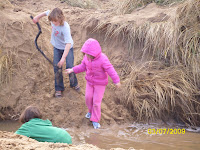 Just imagine everyone slightly bigger, and with longer hair, and the banks of the stream not quite so steep, and Alice with a different hat, and you'll have a pretty accurate picture of how they spent every morning.

Liz wondered if the urge to alter the course of running water is hard-wired, or if it's culturally determined -- are there any societies in the world where children don't feel compelled to build a dam or dig a deeper channel? I suspect it's a primal instinct. No matter how cold or wet their feet became, how raw their hands from digging and scraping, they couldn't keep away.
Posted by A latte beckons at 9:05 AM No comments: