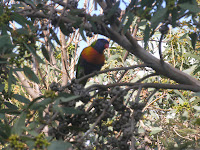 It's An Ordinary Day

It's the pile of laundry behind the door.
It's what's for dinner, what's for dinner, what's for dinner?
It's picking up the books, the textas, the scraps of paper, the toys, the clothes, the newspapers, the hat, the toothbrush, the breakfast bowl, the coffee cup, the footy scarf, the bandaid, the coins, the abandoned pyjamas.
It's what can I put in the lunches?
It's the washing machine jammed again.
It's making the beds.
It's unpacking the dishwasher; stacking the dishwasher; unpacking; stacking; unpacking.
It's the mud on the back verandah.
It's bucketing out the grey water. It's hanging out the clothes.
It's Mummy, can you...?
It's brushing hair, brushing teeth, scrubbing gunk off the basin.

It's noticing that the Happy Wanderer is in flower.
It's the lorikeets.
And the little one says, I'm going to make a present for my sister.
That's what it is.
Posted by A latte beckons at 10:07 AM