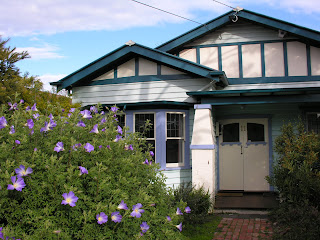 My Place, and Our Place

We've been loving My Place at our house. (Actually it's a bit sentimental for Alice, though she likes the historical aspect, but the rest of us are lapping it up.) Michael even rushes home from cricket training to catch it, and both of us have cried. I'm longing now to watch it forwards as well as backwards in time, to pick up the connections I might have missed.

It would be fascinating to somehow get a snapshot of our own house every ten years. We've only been here for five and a half years, so our family barely registers so far.

Ten years ago the previous owners, a couple called Colin and Stephen, were living here. They were making the mosaics that adorn our tank stand and laundry splashback, the stained glass in our back door, and painting the clouds-and-flowers ceiling in what is now Evie's bedroom. Perhaps they were building the bungalow that they used as a studio, and which is now my study and the guest room. They remodelled the bathroom and extended the kitchen. They were planting all the wonderful trees in our garden, which have transformed it into a slice of bushland in the inner suburbs, and attract all the parrots and honey-eaters we see every spring.

Twenty years ago, if I remember what Colin and Stephen said correctly, a grumpy old woman and her grown up son lived here. They painted the insides of the cupboards lurid green. Their backyard was a spartan lawn with a Hills hoist and a lemon tree.

And then it's a big blank, except for strangers' names on the title deed, all the way back to 1927, when the house was first built. All the houses around here were built around the same time; it was a Californian bungalow housing estate. It would have been as grim as most new estates - no established trees, dusty roads, no gardens, all the houses raw and ticky-tacky. The school over the back fence wasn't even finished yet; it was probably a big muddy building site, rather like it is now, with a new "stimulus" building going up. There were probably lots of little kids in the street, just as there are now.

I wonder about all the people who lived in our house before it was ours. Who slept here, wept here, kissed here, dreamed here, died here? Was anyone born under this old roof? What secrets did they hide? What pets did they keep? Were there chickens in our garden? What pictures hung from their walls, what rugs lay on these old pine floorboards? What children whispered and giggled and quarrelled here, before Alice and Evie? Was Evie's room the sitting room, or a bedroom, then? How many kids shared Alice's little bedroom? Was there a sleep-out? What colour was the house before Colin and Stephen painted it blue and white?

Alice says she saw a ghost in our kitchen. I wonder whose ghost it might have been. And I wonder what they think of us?
Posted by A latte beckons at 4:59 PM