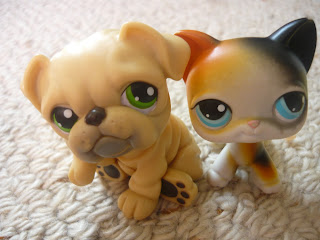 A sad thing happened on our holiday: we accidentally left these little guys behind on the front beach at Sorrento. Though Evie has a vast collection of Littlest Pets, these two were special, her "babies." They were called Sugar and Nuttlex.

We were all culpable. It was Alice's fault, because it was her idea to bring them to the beach; Evie's fault, because they belonged to her, and she should have looked after them; Michael's fault, because he arrived with kites at a crucial moment and we think that's when they were dropped in the sand; and my fault, because I'm the mum, and it's my job to keep track of everything, isn't it? Anyway, I feel really bad about it. Ridiculous, I know, but it does feel as if Sugar and Nuttlex were part of our family, and I hate the thought of them, so small and helpless, abandoned on the beach, as we gathered up our towels and strolled away forever.

It's absurd to single out the loss of Sugar and Nuttlex when you think of all the toys that drift out of our lives - left behind, broken, thrown away, lost in the garden, sifted to the bottom of the toy drawer, marooned in the attic. I remember other objects which were once precious and have now disappeared from my life - a ring, a book, a photograph - and I mourn them vaguely, but because I can't pinpoint the exact moment of their loss, the grief is blunted. I can let them go. But I almost felt Sugar and Nuttlex slipping from my grasp, and the pain is small but sharp.

Evie cried. I said, don't be disappointed if Daddy can't find them. She said, are you kidding? I'll disappoint my head off!

So we hope that means that some other child has picked them up and put them in their pocket, that they've been carried away into a new life, with a new family and a whole set of new adventures. They won't be Sugar and Nuttlex any more. But we hope that someone loves them.
Posted by A latte beckons at 3:33 PM