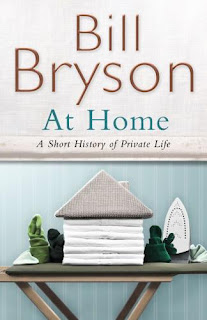 I love obscure facts, and I love houses, and I love Bill Bryson. So the combination of all three in Bryson's At Home has proved perfectly irrestistible.

This delightfully corpulent book is sub-titled "A Short History of Private Life," and in it, Bill Bryson rambles through his English country house and along the way, wanders through the history of domestic comfort -- so far he's covered (among many other topics) the story of electricity, the telephone, landscape gardening, mice, sperm whales, tea and servants. There is a fascinating fact or anecdote on every page (often many more than one...) and the chuckle value is high, as is the "wow, I never knew that" factor.

Did you know that lobsters used to be so common round the coasts of Britain that servants "sought written agreements from their employers that they would not be served lobster more than twice a week"? That the aspidistra was uniquely immune to the ill-effects of gas lighting, hence its ubiquity as a Victorian houseplant? That caravans of camels up to seventy miles long carried salt across the Sahara from Timbuktu to the ports of the Mediterranean? That despite widespread panic over rabies-carrying bats in the US, more people die from food poisoning at church picnics every year than from the entire history of human contact with bats?

I gleaned each of these tidbits from opening the pages of At Home at random. So far, Bill and I have reached the study; there's only the garden and the upper floor to go before our tour concludes. I'll be sad when it's over.
Posted by A latte beckons at 11:12 AM