Dragon in the House 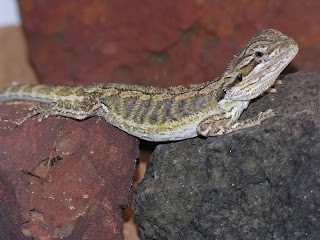 We live with a dragon - a bearded dragon, to be precise. He lives in Alice's bedroom and his name is Rex. Most of the time he sits quietly on his rock, basking under his sunlamp and thinking deep thoughts - well, we assume they're deep thoughts, because he can't speak, and despite Alice and her friends' best efforts, they have not yet succeeded in teaching him to read or write.
He is, however, communicative in other ways. He rushes up to greet us; he waves his little arm, and scrabbles against the glass of his tank. He gets very excited when he sees his dinner coming. Twice a day he receives a meal of crickets (laboriously plucked or shaken from their bucket by Rex's human servants) and a plate of chopped vegetables. He adores bok choi, spinach and carrots; he's less impressed by tomato, apple or asparagus.
At the moment he's shedding, because he's growing so fast that his skin no longer fits. It drops off in large crisp flakes, not unlike cornflakes. When we take him out of his tank, he skitters and leaps to the highest accessible point - the back of the couch, for example - and surveys his kingdom. We know he can see colours, because he tries to eat the green portions of the blanket.
When you take him to the window, he stares in amazement at the immensity of the world. Rex was born in a reptile shop; he's never seen the desert, never climbed real boulders or caught wild insects. If you release a fly into his tank, he freezes, then launches himself into space with his mouth open to snatch it in mid-air. We find this reassuring. If for some reason Rex had to survive in the wild, we know he could catch himself some dinner.
Though he might begin to wonder where the servants with those platters of mixed salad have got to.
Posted by A latte beckons at 1:54 PM