The Doctor (And Another Doctor) 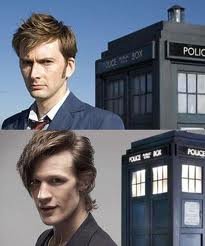 So it's a year since Stephen Moffat took over the reins as executive producer and chief writer at Doctor Who, and it's time to consider what kind of a fist he's making of the job. In my opinion: a pretty damn good one.


In the new version of Who, I've always loved Stephen Moffat's episodes the best. His writing is simply breath-taking, and he understands the possibilities of time travel for clever, puzzling, deeply satisfying stories in a way that I don't think Russell T. Davies was ever really interested in. It seemed to me that RTD was so caught up in the mythology of the Doctor's character (a near-immortal, deeply lonely, almost god-like figure, stalking the wastes of time and space with the fate of worlds weighing oh-so-heavily on his shoulders, etc etc) that he rather neglected the sheer fun you can have with a time machine, zooming back and forth to five minutes ago with a silly fez on your head and contradicting what you're just about to say, if only you hadn't already said it.

I was quite prepared to not warm to Matt Smith's Doctor (too young, not serious enough) but he's won me over. It's been a wrench to part from David Tennant's No. 10, who did seem to me the perfect embodiment of the Doctor, but I think I've come to terms with it now. And I must admit, at times, RTD's Doctors were so freighted with all that history, all that meaning, that it sometimes became a bit... a bit much. A bit pompous, a bit earnest, a little bit too much staring soulfully into the middle distance with flames in the background. The Eleventh Doctor, Stephen Moffat's Doctor, is playful and merry and clever, and most of the time, he's having fun.

Having said all that, I do have reservations. I don't like the new Daleks. The cartoonish, clunky, brightly-coloured versions just aren't scary to me; I prefer the rough, industrial, ruthless originals. I'm not sure about all this business about being married to River Song; the Doctor doesn't do "married."Moffat doesn't seem to have the same reverence for the Doctor's mythos as RTD; he chucks stuff around a smidge too carelessly, perhaps.

But I can go with it. We all have our own visions of the Doctor. I was around when John Nathan-Turner reinvented the Fifth Doctor as a youthful action hero; there were gasps of dismay from fandom, but we all survived. And the Doctor and his TARDIS keep on spinning, through eternity.
Posted by A latte beckons at 1:41 PM