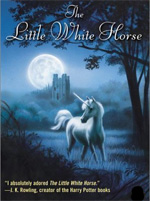 One of my very favourite books when I was growing up was The Little White Horse by Elizabeth Goudge. (It was also one of JK Rowling's childhood favourites, which is why, I suspect, it's been reissued, and I was able, to my great delight, to find it in a bookshop.)

It's the story of straight-backed, clear-eyed Maria Merryweather, who comes to live at her ancestral home, Moonacre Manor, in the village of Silverydew in the West Country in 1842. Even the place-names give you a sense of the kind of book this is: magical, lyrical and intensely English.

Maria's bedroom is a circular room at the top of a tower, the ribs of its vaulted ceiling meeting at a carved sickle moon. She has a four-poster bed with pale blue silk curtains (very worn, but scrupulously clean) and a patchwork quilt, a tiny fireplace and a box of biscuits, topped with delicate sugar flowers, on the mantelpiece, in case she gets hungry between meals. At the age of nine I thought all this sounded exquisitely beautiful, the pinnacle of perfection, and it remained my model of bedroomly bliss for many years.

Anyway. Reading Misrule's wonderful tribute to Diana Wynne Jones got me thinking. Like Misrule, and at around the same time, I clung to books of English fantasy in a sea of Australian realism. But I wasn't living in Australia; I was exiled in the Highlands of Papua New Guinea. I utterly rejected any stories about my own country in favour of an imagined English homeland, the land of Maria Merryweather, with her silvery hares and great golden dogs. When I was eight, we visited my father's family in England, and when we left, I sobbed for days. England felt like home in a way that Australia never had. I belonged in that damp green landscape.

Was it the blood of my ancestors calling me home? Or was it just that the books I adored were all set in England? Was it literature that had sunk into my bones?

I chose the English books because they admitted the existence of magic. The Australian books of the era were harsh. There were bushfires, droughts, hardscrabble farmers, children thrust into a disaster and having to cope alone. I didn't want a bar of any of that. It was all too confronting, too real, and yet somehow unreal. In a strange way, those stories felt more alien to my life as an Australian child in New Guinea than the adventures of the children in the magical books I craved. I lost myself in the enchanted country of Elizabeth Goudge, CS Lewis, Joan Aiken, E. Nesbit, Penelope Lively, Lucy M. Boston, Alison Uttley and Philippa Pearce, and I was completely at home there.

Was it the magic in those books that called to me, or their Englishness? I've always thought it was the Englishness, but perhaps it was the magic. If I'd been able to find stories of Australian magic, perhaps my reading childhood might have looked quite different.