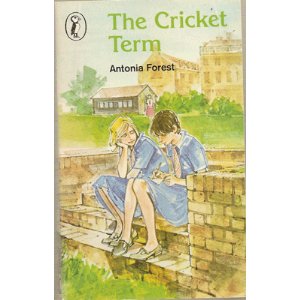 Long before I became a football tragic, I was a cricket-lover.

With a handful of fellow incompetents at my girls' school, we'd take bat and stumps up to the top corner of the hockey field and vaguely hit the ball around - a far cry from the almost professional gamesmanship exercised by Nicola Marlow and her team-mates in The Cricket Term. (I finally succumbed to temptation and treated myself to a second-hand copy of this beloved text of my adolescence - it wasn't even very expensive!) It may or may not be a coincidence that my cricket-playing gang at school was also a gang of Doctor Who fans, and these were the years when the Fifth Doctor wielded the willow. 'More of a tennis player than a cricketer,' he sniffed derisively of one meglomaniacal villain. Ah, how we loved him! 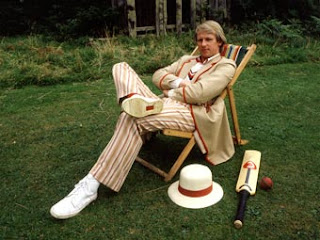 My friends and I may have been more attracted to the idea of cricket than in the game itself, but we did follow real-life cricket as well, rocking up to the MCG every summer for tests and one-day matches (still pretty new back then). My favourite player was Jeff Thompson, because if you squinted really hard, he had the same flowing blond hair as Peter Davison. I was young, okay? But I also liked the dash of David Gower, the dour streak that was Chris Tavare, and the spunky "Foxy" Fowler. As you can see, I didn't restrict my love to the Australian team -- there was nothing mindlessly patriotic about my love of cricket. Perhaps that was part of the appeal -- it was perfectly possible to follow the games of individual players with deep appreciation. Cricket crowds applaud a well-struck four, a magnificent catch, or a fizzing delivery, no matter whose side the player is on. At least, they used to...

Cricket is a natural choice for those who love words. It almost seems to have been invented for the purpose of being written, and read about. Perhaps no other sport has provided the excuse for so much loving and well-crafted analysis, and even poetry. Test match commentary has an eccentric leisureliness. With up to five days of play to fill in somehow, they can afford to reminisce, to relive past glories and past disasters, to speculate, to divert to meandering discussions of chocolate cake and seagulls. There's nothing like drifting in and out of sleep to the murmur of Ashes commentary from the other side of the world. And reading about cricket is even better than listening to it. Peter Roebuck's cricket columns in The Age were one of the reliable joys of summer. I miss him. And Gideon Haigh is not just a superb cricket writer; he is a superb writer, full stop.*

Even cricket players in fiction seem conscious of their own literary heritage. In The Cricket Term, Nicola confesses to a longing to be recognised by her 'singularly distinctive late cut' like Peter Wimsey - whose disguise is betrayed, in Dorothy L. Sayers' Murder Must Advertise, by his unmistakable batting style. And possibly when I was mucking around on the hockey field, I was thinking of Nicola and her team's unlikely victory over the Sixth in the Kingscote Cricket Cup. I once wrote a sort-of cricket story of my own, called 'A Gap In The Field,' though it was about watching cricket, rather than playing it. 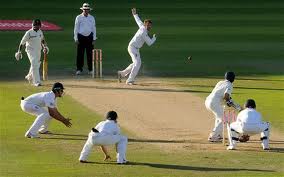 These days, the measured glories of Test Match cricket seem set to be blown away by the senseless farting of Twenty20, a game that bears virtually no resemblance to the sport that spawned it. These days, we are offered a handful of tests, all crammed into the first few weeks of summer so the calendar can be cleared for the 'spectacles' to follow, when people are on holidays and can crowd into the grounds to guzzle beer and blow horns and watch fireworks go off and motorbike tricks and cheerleaders and lord knows what other pointless 'entertainment.'

Well, that's not my idea of what cricket is all about. Give me a sport where you can bring along a novel and a radio, where the reading and the listening and the watching all fuse into a meditative, dream-like whole. That's what I call summer.


* Dear Santa, if you're reading, a copy of Haigh's latest, On Warne, would tuck nicely into the old stocking. Just saying...