To The Wild Sky 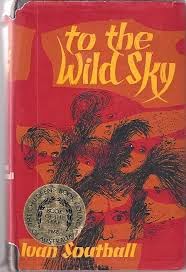 I remember picking up To The Wild Sky by Ivan Southall from the classroom bookshelf in Grade 5, starting to read it, and putting it back. Perhaps it was too confronting; my father was a pilot, who flew small planes much like the one featured in the book. In the early chapters, the pilot of this plane suddenly drops dead, leaving the six children on board to cope as best they can. One of them, Gerald, has luckily tried his hand at flying this plane before, under his father's supervision (even though he's only 13!), and he takes the controls. The book follows their flight, their crash landing, and what happens next.

Even after nearly forty years, I still found this a difficult read; I started it before Christmas and only just managed to finish it yesterday. It might be the almost excruciating detail of the flight itself that put me off, especially in light of recent aviation disasters. It was just too vivid for my imagination, too realistic. I very much enjoyed Southall's Hill's End last year, and this is similar in theme -- stranded kids forced to draw on their inner resources, and co-operate, to survive -- but this version came perilously close to be being too harrowing for me. It was all so grim, lacking the flashes of humour that lightened Hill's End. It was well done, despite the traces of sexism and racism of the time -- it was published in 1966 --but I soldiered through this one rather than enjoying it. Even the ending is pretty grim; the kids aren't rescued, but they manage to light a fire, and might be about to find fresh water in their remote location. It's not much to feel cheerful about!
Posted by A latte beckons at 3:49 PM