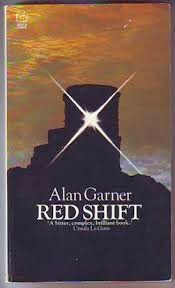 Alan Garner's Red Shift is part of my collection, I've owned it for years. I suggested it for the Convent book group (theme: Unusual Styles) and I'm hoping it will provoke a good discussion. I'm leading the session next time so I'd better be prepared! I read this slim volume all in one day, yesterday, partly on the tram and train, going to a book signing at the Whitten Oval (more on that later). I think it benefitted from being read all in one sitting.

I found Red Shift really tough going the first time I read it, oblique, opaque and totally confusing. This time seemed much easier, and I had a better handle on what was going on. It's basically three intertwined stories, all centred on a young man called Tom/Thomas/Macey, who share a tendency to instability. The three men are separated in time (present day, English Civil War, Roman Britain respectively) but joined by a shared landscape on the borders of Cheshire (all the places in the book are real), and seemingly by a felt awareness of each other. They are also linked by an object, an ancient axe head, which comes into each of their possession. Events and dialogue echo back and forth and the story is told almost completely in dialogue and very sparse descriptions. Apparently Garner based the story on the myth of Tam Lin, and the Tom character in each strand has a close relationship with a young woman, to whom he holds tightly (as in the legend) and who also holds onto him.

Red Shift can have several meanings -- Tom laments that he needs a 'red shift' (a la the Doppler effect) to get him out of his depression (ie the blues), and in Civil War times, Margery wraps the precious axe head in her red-dyed petticoat. There is also a reference to a figure on a tomb wearing a skirt with traces of red paint. But to me it stands for the echoes of the past, leaving their resonance as events zoom by.

I'd forgotten just how brutal this book is -- there are killings aplenty, and rape, and casual violence, and betrayal, and the threat of suicide. Apparently it was made into a TV special, I don't know how they did it without an R rating! It feels like an adult book to me, except that the protagonists are young -- about nineteen or twenty (not really teenagers). There are hopeful (sort of) endings for two of the three couples, but even the hopeful endings are pretty bleak! It's definitely challenging, and for such a slender novel there is a tremendous amount packed in.

I'm really looking forward to talking about this one with the group. I'm going to quickly read it again and take some notes. I think this is a masterpiece.
Posted by A latte beckons at 3:25 PM