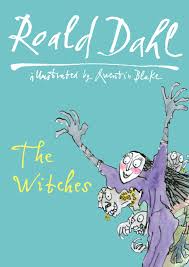 I borrowed Roald Dahl's The Witches from the library for the Convent Book Group next meeting, which has the theme of, you guessed it, Witches. We have done Witches before, but there are so many options out there, we had no trouble coming up with fresh titles!

I approached this book from the odd position of being extremely familiar with the first half of the story, and knowing nothing at all about the second half. This is because we had the first disc of the audiobook version in the car for a long time, so I heard the first part many times, read by the brilliant Simon Callow, rolling his Rs beautifully and relishing the Norwegian and other accents (especially the grandmother). (I've just realised, I don't think the little boy narrator is ever given a name! I hadn't noticed…)

Perhaps this is why I enjoyed the first section much more than the second part -- the spooky stories of the disappearing children, who are turned to stone, or vanish into paintings, are really creepy. But the rest of the book, where the boy encounters a mass meeting of witches and falls foul of their evil ways, before giving them a taste of their own medicine, didn't engage me as much.

Can I make a confession, possibly at the risk of being thrown out of the ranks of children's authors? I don't really like Roald Dahl's books. There, I've said it. Dahl's much celebrated 'streak of darkness' I find just plain cruel. The gruesome and repulsive hi-jinks leave me cold. I do quite like Matilda, but her parents were so repellent I found it hard to believe that they could have produced such a sweet and gifted daughter…

Anyway, The Witches. It's unusual for a kids book in that the child hero ends up as a victim of the evil-doers -- he is turned into a mouse, and not turned back. And the book ends with his being quite pleased that mice don't live very long, because he will die at the same time as his beloved grandmother -- which is a refreshing attitude! So I give points for that.

Or is it just disturbing??
Posted by A latte beckons at 11:06 AM