The Angel of Mons 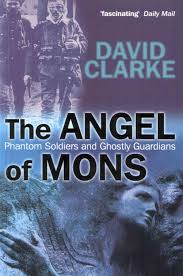 You know how sometimes you finish reading one book, and the book you're intending to read next is all the way over the other side of the room, so instead you pick up the book that happens to be lying around within reach, and you read that first? That's what happened here… I bought David Clarke's The Angel of Mons: Phantom Soldiers and Ghostly Guardians for Michael at the library book sale, because it was about the First World War, which is His Thing, and also, after The Woman In Black, I was in the mood for more ghost stories.

I like to think (after many years of marriage) that I'm reasonably well-informed about WWI, but I must confess that I had only vaguely heard of the story of the Angel of Mons. Apparently after one of the earliest battles of the war, when the hugely outnumbered British forces managed to escape being completely wiped out by the mighty German Army, stories began to circulate that the British soldiers had been miraculously saved at Mons by the intervention of supernatural forces -- a cloud, a bright light, ghostly soldiers from Agincourt, St George, Joan of Arc, or (as the story finally settled) a troop of angels.

But the book turned out to be less about ghostly visitations and visions, and more about the power of rumour, propaganda and legend in times of severe social upheaval and fear. There was no direct evidence that the supernatural intervention took place; no reliable eyewitnesses were ever tracked down, and the story always had that familiar 'urban myth' air about it -- a friend of a nurse, who spoke to a soldier, whose brother had definitely seen something that day… It seems that the story was officially encouraged, not in the immediate aftermath of the battle itself, but in the dire months that followed, when the war looked bad for the Allies. It was comforting and socially useful for people to believe that God was literally on their side -- to the point of personally intervening to protect the British troops.

This was a very well-researched book (which was probably more heavy on the detail than I really needed it to be!), but an interesting read nonetheless. Something to think about, and watch out for, in our own scary times: what are the useful legends and apocryphal stories that our government might like us to believe?
Posted by A latte beckons at 10:27 AM