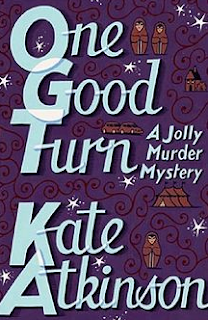 Kate Atkinson's second Jackson Brodie novel, One Good Turn, is sub-titled 'A Jolly Murder Mystery', which is not a totally accurate description of its contents. It is, however, a lot jollier than the other two titles, since (spoilers!) only unpleasant characters (with one exception) meet a gory end and everyone else survives relatively unscathed, except for Jackson, who is unmercifully beaten up as usual. Given that Atkinson has said that she wanted to create 'a good man' for her main protagonist, you have to wonder if there is a touch of sadism in her treatment of the poor bloke, who seems to be  biffed with baseball bats, run over, almost drowned and punched up every few pages.

I'm starting to see why some readers complain about Atkinson's tricksy love of coincidence, though it isn't spoiling my enjoyment (yet). In the opening chapters we are presented with a mysterious man with a false name who is obviously up to no good; a beserk, murderous thug; a gentle writer of the aforementioned 'jolly' mystery novels, who lives in an imagined 'retro-utopia' of nostalgic England (I live there too); a Russian call-girl; and middle-aged, matter-of-fact Gloria who suspects that her husband is a crook.

Of course, events will slowly draw this disparate cast together, with the aid of Jackson, his actress girlfriend Julia (from Case Histories) and Detective Inspector Louise Monroe (who will return in When Will There Be Good News?), the threads pulling tighter and tighter until you're scared the plot will snap under the strain. But it doesn't -- not quite.

One more in this series to go. I'll definitely read it, but I might leave a longer gap this time.