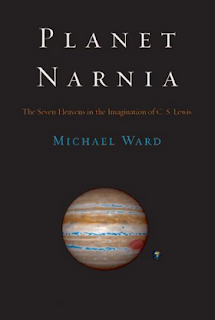 I have rarely felt such genuine excitement reading a book (let alone a book of literary criticism!) as I did while reading Michael Ward's Planet Narnia.

Ward, a Lewis scholar of many years, has developed a theory so persuasive and elegant, it's utterly irresistible. Simply put, he argues that C.S. Lewis wrote the seven volumes of the Chronicles of Narnia according to a secret scheme which adheres to the seven planets of the medieval Ptolemaic universe (namely, Jupiter, Sun, Moon, Mars, Venus, Mercury and Saturn).

Thus, The Lion, The Witch and the Wardrobe bears the influence of kingly, generous Jupiter, who 'banishes winter' and forgives all. Peter swears by Jove and the colour red recurs; there is feasting and jollity. Seen in this light, the appearance of Father Christmas, sometimes seen as incongruous, makes perfect sense.

Prince Caspian is influenced by war-like, disciplined, knightly Mars; The Voyage of the Dawn Treader by golden, joyous Sol; The Silver Chair by watery, submissive Luna; The Horse and his Boy by quicksilver, eloquent Mercury, forever dividing and uniting; The Magician's Nephew is ruled by fertile, life-giving Venus; and Saturn, old, cold, ugly and deathly, rules over The Last Battle.

There is too much textual evidence to repeat here, and I must admit I skimmed some of Ward's more abstruse philosophical discussions. There is also a lot of material on Lewis's Out of the Silent Planet trilogy, which anticipates and reinforces Lewis's thoughts on the planets. I'm convinced that Ward has indeed found an important key to understanding the Narniad. The glorious jumble of imagery and atmosphere, the apparent unevenness of plot and some inconsistencies are at last explained. For example, the figure of Aslan is no longer a simple allegory for Christ, but appears in different planetary guises and roles in each volume.

This book has made me see these beloved books in an entirely new light. I can''t wait to read them again!