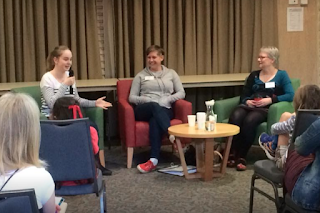 Last weekend I had the pleasure of being a guest at the Eltham Festival of Stories at Eltham Library (that's me on the right, above). It was a wonderful opportunity to catch up with some old friends, and meet some new ones, like Ailsa Wild, author of the Squishy Taylor series (she's the cool one in the middle), and the lovely Teagan who interviewed us both with panache (she's the one with the mic).

The topic of our panel was 'Where Do Stories Come From?' and I'd expected to be talking mostly about Crow Country, which is my best-known book. But as it happened, the lovely Teagan wasn't able to get hold of Crow Country -- all the copies were out from the library, which is nice to know! -- and she read New Guinea Moon instead. So I mostly talked about that.

New Guinea Moon is partly based on my own childhood memories of growing up in the Highlands of PNG in the 1970s. My father was a pilot, and my memories of the Mt Hagen ex-pat community and my later adult unease with their colonial attitudes, even at the time of Independence, were at the centre of the novel.

After we spoke, as always happens when I talk about New Guinea Moon, members of the audience came up to say that they, too, had a connection with PNG. It amazes me that so many Australians have a personal history with our nearest neighbour, and yet PNG receives so little attention (compared to say, the UK!) and we know so little about the place. Someone always wants to tell me, my aunt was a missionary or my grandfather was an engineer or even, I grew up there too.

This time a woman came up to say that her uncle had also been a pilot in the Highlands, from the 1970s until he was killed in a crash in the early 2000s. I asked his name, but somehow I already knew the answer. I remembered her uncle vividly. He had worked with my father and been a good friend of my parents; we'd all been shocked to hear of his death, which featured in a story on the ABC's Foreign Correspondent a few years ago. In fact, the character of Tony in New Guinea Moon was partly based on my memories of him. We both ended the conversation in tears.

It's strange how sometimes what seem to be the most personal, private stories end up being the ones that other people find most easy to share. And what a coincidence that she had happened to attend this particular session on this particular day, and that I'd happened to discuss this particular book. It turned a lovely day into a really special experience.
Posted by A latte beckons at 11:12 AM