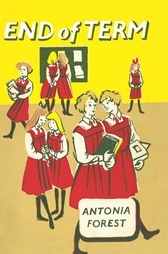 Is it terrible of me to confess that I own not one, not two, but three copies of Antonia Forest's End of Term? I bought the first, a Puffin edition, in 1991, in an op shop in Scotland, and it reminded me just how wonderful Antonia Forest's books were (I had discovered some, but not all of them, in my school library). The second copy, pictured above with a very ugly cover, was ordered from Girls Gone By last year. And then I found another, less battered Puffin edition in my local secondhand shop -- probably discarded by someone who had also upgraded to a GGB edition!

But I don't care, because I love this book. I didn't re-read it when my GGB copy arrived, but waited for Michelle Cooper's read-through on Memoranda. I've read it so many times that I almost didn't need to refresh my memory, but revisiting it was a pure pleasure.

In this fourth Marlow book, and the second of the school stories, the action twists between two plot strands -- the netball team, which Nicola is inexplicably left out of (thanks to the machinations of her nemesis, Lois Sanger) -- and the Christmas play, which Lawrie, the fabulous actress, is inexplicably left out of (thanks to the dubious judgement of the headmistress, Miss Keith, who has her own ideas about casting this particular piece and feels that reverence and religious feeling should be more important than talent). These twin disappointments are the backdrop against which various friendship dramas play out (see what I did there?), with Nicola finding herself isolated from her sister and her former bestie, Tim, and making two new friends in spiky Miranda and shy Esther.

There is another strand woven skilfully and unusually through this book, which is religion. Miranda is Jewish, therefore also excluded from the play. And Nicola's friend from home, Patrick, is Catholic, and a sincere believer, who still feels passionately grieved about the Reformation and the martyrdoms of 500 years ago. Nicola is a puzzled agnostic, who tends to think that people used to believe 'properly' in the distant past, but that 'science changed everything.' And her twin Lawrie is a cheerful and unabashed heathen who thinks the whole Christian story is completely imaginary (and there are plenty of readers who would agree with her!) Their various viewpoints are inserted subtly into the story -- much more subtly and entertainingly than in later books (I'm looking at you, Attic Term).

Antonia Forest is at the peak of her powers in this, and the next few books in the series. An absolute delight.