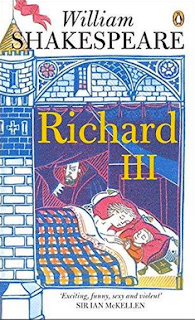 Since I've been on a slight Shakespeare run lately, it seemed appropriate to comment on a work that, strictly speaking, falls on A's reading list, not mine. Her reading has improved immensely in recent years -- in fact, she's taking English Lit instead of straight English for VCE -- but it's still hard work, so sometimes I read her texts aloud for her (I wonder how many hours parents of dyslexic students spend on this? I can't tell you how many parents have contacted me after reading Crow Country aloud to their dyslexic kids).

So far this year, I've read her Kafka's Metamorphosis, we've started Cold Blood (that's going to be a slog), and now Richard III. And frankly, I have to say that I'm not impressed! I've only seen the play performed once, years ago in the UK, and I was lucky enough to catch the original WWII-inspired production by the Royal National Theatre, which was adapted into a film in 1995. That was gripping, so it just goes to show how much depends on imaginative staging and strong performances.

On the page, the words are less exciting (maybe it's the way I read them...). 'It's just exposition, punctuated by slaughter,' was A's analysis. There are a lot of characters, many of whom appear on stage only to be executed in the next scene. The relationships are confusing. People sprint on and off the stage, shout something, die. It feels like a student play, an early play. It's clunky. Not one of your best, Will. Though now that Richard's body has been discovered, at least we know that Shakespeare wasn't lying about the hunchback -- he really did have one.