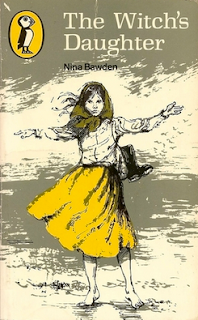 I picked up Nina Bawden's The Witch's Daughter from a box of books that a friend was discarding, because I'd never read it. Published the year I was born, on one level it's a very old-fashioned adventure story which deals with jewel thieves and hidden treasure on a remote Scottish island. On another level, it's a skilful and engaging exploration of what it means to be different.

Our three child protagonists are Perdita, the so-called witch's daughter, a half-wild girl who is teased and bullied by the local kids; her greatest dream is to be allowed to go to school. Brother and sister Janey and Tim are visitors to the island. Imaginative, sensitive Tim is desperate for his father's approval; Janey is blind, and keen for more independence than her anxious parents will allow. Janey is particularly interesting, because her special strengths shine during the adventure -- she is extremely observant, with an excellent memory, and (spoiler) at the crisis of the story, it's Janey who saves the others by leading them out of a pitch-black cave.

This is a beautifully written novel for younger readers, but alas, I fear they might find it a little slow to get going. I think I find these old books so satisfying because they don't talk down to their readers, and the quality of the writing is wonderful.