Riding the Bus With My Sister 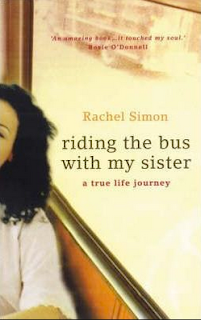 Happy New Year to you all. I must say I'm very pleased to say farewell to 2018, which was a horrible year in many ways, but I'm hoping for a greatly improved 2019!

Riding the Bus With My Sister is Rachel Simon's account of a year she spent with her intellectually disabled sister, Beth. Beth doesn't work; she prefers to spend her days hopping the bus routes of her home town (a small, unnamed, American city). Beth gets up at 5am to catch the first bus of the day; she knows all the drivers and many of the passengers know her. At first Rachel is inclined to see Beth's obsession as a waste of time, but as she too gets to know the drivers, with their patience, wisdom, humour and philosophy, she begins to see the value in slowing down and making connections (more on that topic later...)

I was drawn to this book because I also have a younger sister with an intellectual disability, and I have also been tormented by those guilty thoughts that I'm a 'bad sister' -- not supportive enough, impatient, sometimes bored. I have wrestled with the same dilemmas that Rachel struggles with: when to allow Beth the freedom to live her life the way she chooses, and when to act in her sister's best interests, even when she resists (for example, when Beth risks her sight by refusing an eye operation).

I could see many parallels between Beth and my sister. They both hate being 'bossed'; they can both be extremely stubborn. They can develop overwhelming crushes on people. If they disagree with you, they don't argue back; instead, they just shut down, presenting a blank wall of passive resistance. This book helped me to see that these tactics are not just infuriating quirks, but a logical response to a complex, sometimes incomprehensible world where people are always trying to get you to do stuff even if you can't understand why. Beth and my sister both cling fiercely to their independence and their privacy, to that small secure space they've been able to carve out for themselves. They don't like change. They are hyper-aware of 'meanness' and any hint of bullying. They can seem self-centred, but perhaps that's a survival technique too. When you have to spend so much of your time and energy protecting yourself, there's not a lot left over for empathising with others.

As a result of reading Riding the Bus With My Sister, I've joined a Facebook group for adult siblings of people with disabilities, and already I can see that most people have to deal with far more severe problems than my sister. She has a job, she has paid off her own house, she lives independently and mostly happily. Her life is hard at times, and I have to remember that. But we have a lot to be grateful for, too.