See What You Make Me Do 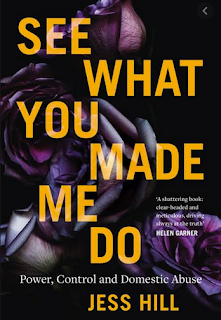 Two years ago, a friend of mine was murdered by her intimate partner, so issues of domestic violence and abuse have taken on an immediate and personal horror.

I asked for Jess Hill's See What You Made Me Do as a birthday present, but I actually received it a little early, which I'm grateful for. This is not an easy read; it's one of the most harrowing, disturbing books I have ever read. But it's clear, confronting, and essential.

There is so much information here, so many terrible stories, that I don't know where to start. But two chapters stood out. 'Through the Looking Glass' shows how the Family Court has been so thoroughly captured and corrupted by the aggrieved fathers' movement that if a mother alleges abuse, the presumption now seems to be that she is inventing accusations to 'alienate' the children, and she is more likely to lose all custodial contact, while her children are returned to their abuser. I couldn't believe what I was reading, but the day after I finished this chapter I saw a story in the newspaper where a murdered child had pleaded not to be handed over to his abusive father, because he was terrified of him. This corruption of the Family Court system is a desperately urgent problem, which goes largely unrecognised because reporting on Family Law matters is so restricted (ironically, to protect the privacy of the children).

The other really powerful chapter is about the experience of Aboriginal women. It contains a brilliantly succinct account of the inter-generational damage caused by colonisation, and also some really encouraging stories of the way Aboriginal women have fought back against abuse and social harms in some communities.

See What You Made Me Do ends on a hopeful note, examining some proven pathways in the US and in Australia which have managed to dismantle the structures that enable perpetrators to escalate their abuse. There ARE solutions, there IS hope. All it takes, as Hill points out, is political will and determined people to work together. We have changed social norms before -- smoking, drink driving. And in the long term, it will cost less economically than the alternative, not even considering the cost in human lives and psychological injury.

Women and children are dying every day from male violence, but it doesn't have to be this way. Highly recommended.