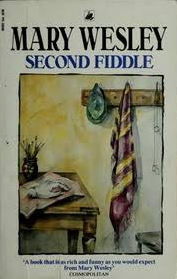 Mary Wesley's Second Fiddle was her ninth novel, and it is a strange, rather disturbing book. It's not overly long, and some of the subplots fizzle out, with characters who seem to have been introduced for no particular purpose.

The story centres on Laura Thornby, at 45 a resolutely independent woman who guards her privacy and her emotions fiercely. In search of a diversion, she picks up with 23 year old Claud, an aspiring writer, and adroitly finds him a place to live (in a loft, naturally) and gainful employment while he's writing (an antique stall at the local market, which she helpfully stocks with items from her mother's attic). As Claud matures, Laura finds herself becoming more emotionally involved than she intended.

The sting in the novel's tail comes when it's revealed that Laura is the offspring of an incestuous union between brother and sister (not really a spoiler, as this is hinted at very early in the novel). This is apparently why she keeps herself so determinedly single and childless. Her elderly parents are a rather creepy pair, not surprisingly, and this shadow over Laura's origin made the whole novel very dark for me, and not as much fun as Mary Wesley can sometimes be.

Incest is a theme in several of Wesley's books (though seldom as overtly as here) and it's possible that she had a wartime romance with two brothers; it seems to have been an idea that intrigued her, at the very least. I wouldn't class Second Fiddle among her finest work.