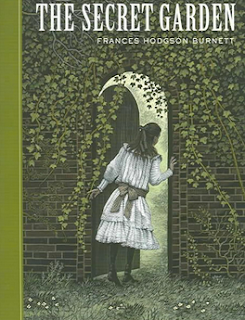 I first read my mother's copy of The Secret Garden from 1949, which I still own, very battered round the edges now. It was her favourite childhood book, and it's probably my all-time favourite, too (in a very crowded field).

The Secret Garden, published by Frances Hodgson Burnett in 1911, was somewhat overlooked in her lifetime, and wasn't even mentioned in her obituary. The sweet Cinderella story of A Little Princess and the ghastly Little Lord Fauntleroy were praised, but no one thought much of The Secret Garden. These days it's regarded as a classic, a masterpiece.

I love so much about this book. The notion of a secret, hidden, neglected garden, closed in by high walls and a locked door, is deliciously enticing. I love sour, lonely Mary Lennox; sturdy Dickon who communes with the wild animals; and fretful, sickly Colin. The scene where Mary and Colin scream at each other in a furious fight in the middle of the night used to give me such a thrill. And all the while, spring is creeping over the moor and reaching into the children's garden, healing their bodies and their minds.

It's been a few years since I last read The Secret Garden, and this time it was the mental health angle that jumped out at me. Neglected, unloved Mary is isolated and angry with the world; poor 'spoiled' Colin is actually tormented with anxiety; and his father, Mr Craven, is sunk in a deep depression after his wife's death. It's communion with nature, fresh air and sunshine and exercise, and a meaningful project in bringing the garden back to life, as well as connecting with each other, that brings them all back to health and happiness. It's a very simple story, but it's the very simplicity of the message that carries such power.