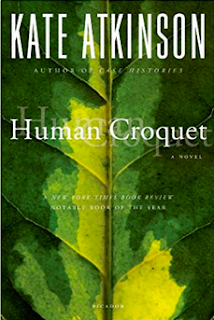 This was a very peculiar book. I'm quite glad I started reading Kate Atkinson with the Jackson Brodie books because if I'd read Human Croquet (her second novel) or even Behind the Scenes at the Museum (her debut) first, I'm not sure I would have persisted.

Human Croquet starts out with a similar feel to Behind the Scenes -- a crowded, inter-generational family saga with lots of characters, very eventful, busy with word-play and inner dialogue, swooping back and forth in time and place. After the sparse elegance of Between a Wolf and a Dog, it felt as if there was almost too much going on.

But then just when I felt as if I had a handle on it, Human Croquet swerved in a different, disquieting direction that made me sit up. This was when the book became really good. Then there was another swerve and things just got really weird and stayed that way. I was not satisfied by the ultimate conclusion, though the section that dealt with Isobel's mother's story was absolutely masterful.

Also: false advertising! The blurb on the back made this novel sound like a time slip story with travel not just to Shakespeare's time, but involving actual William himself. Don't be fooled. The Shakespearean part is very short and doesn't come until very close to the end. Overall, I was slightly nonplussed by this novel. I'm not sorry I read it, but I couldn't help feeling that it could have done with a good edit and a bit of attention to structure.