Re-reading: The Saturdays and The Four Story Mistake 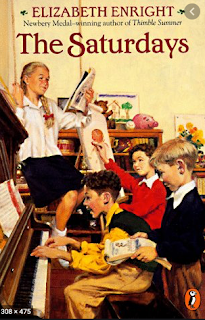 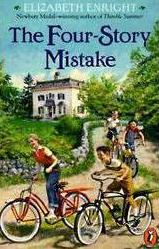 Years ago I picked up all four of Elizabeth Enright's Melendy family books at the library book sale, but I don't think I re-read them at the time. The editions I read originally were hardback copies from the Mt Hagen library, and I remember being enchanted by these first two books in particular -- I'm looking forward to re-visiting And Then There Were Five and Spiderweb for Two, which I don't recall much about at all. Someone got adopted? And in Spiderweb, the older kids make a treasure hunt for the younger ones. I think that was fun.

The Melendy family are almost too good to be true. They get along so well together, they have small adventures, but there are no wrenching dramas. Mona wants to be an actress, she is given a part in a radio serial, but she gets into terrible trouble when she cuts her hair and has her nails painted red without permission. Rush plays piano and builds stuff, Randy draws and dances, Oliver (much younger than the others) enjoys his food and looks forward to tomorrow.

My copy of The Four Story Mistake (which to my Australian eyes should really be Four Storey Mistake) has the library sticker right over the cupola. I always loved the cupola, but I've never been sure how to pronounce it. Couple-a? Cup-ole-a? Coop-ola? If anyone knows, please enlighten me! (Google has just informed me that it should be cue-pella, which I never even thought of. Oh well.)

Having recently re-read the Gone-Away Lake books, Enright's fascination with the past has leapt out these pages too: there is the mysterious sealed room the children discover in their new house in the country, and the story old Mrs Oliphant tells about having her portrait painted as a child in The Saturdays. Not surprisingly, it's these stories that have stayed with me most vividly, while the everyday adventures of Rush finding a stray dog and Randy riding her bike into the back of a bus have faded from my mind.

Of course, all the Melendy stories are historical stories now. They were first published nearly eighty years ago. But I wish I'd thought to read them to my girls; they are such fresh, natural stories, it's been a delight to rediscover them.
Posted by A latte beckons at 12:31 PM