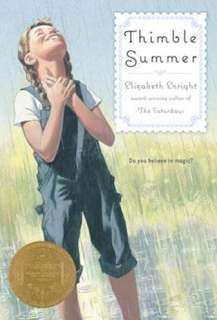 I bought Thimble Summer on the Kindle and it didn't have a cover image at all, so I've picked the one from the many editions this book that appealed to me most. However I'm not sure about the tagline, which reads: Do you believe in magic? Garnet finds a silver thimble in the creekbed at the start of the book, and good things do flow for the rest of the summer, but there's no real suggestion that magic is responsible. (So I guess the answer to the question is no.)

Thimble Summer was Elizabeth Enright's first book, after she'd already embarked on a career as an illustrator, and she immediately won the Newbury Medal. Talk about starting on a high. Thimble Summer shares many of the characteristics of Enright's later work -- the episodic storylines, the small, undramatic events, a rural setting, stories about the past. I would say the defining feature of Enright's novels is a gentle charm. About the most exciting thing that happens is that Garnet and her friend Citronella get locked in the library -- they don't even stay there all night!

Interestingly, just like in Then There Were Five, a stray boy appears and joins the family. This time it's Eric, who has travelled across country and experienced much hardship before he finds refuge on Garnet's farm. Although Thimble Summer won the Newbury, I don't think it's Enright's best work, but the seeds of her future books are discernible here.
Posted by A latte beckons at 11:02 AM