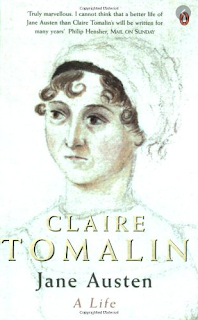 Despite this very ugly cover, I picked up Jane Austen: A Life on impulse to fill out a Brotherhood Books order, as part of a Jane Austen binge I have going on, and I am SO glad I did.
This is a superlative biography -- warm, sympathetic, acute and fascinating. I am sure that Jane herself could not have selected a better biographer than Claire Tomalin. She rounds out the crowded Austen family background, seeks her evidence with care and discrimination, and paints such a lively portrait of her subject that you almost forget how little she left behind for us to pore over.
I wasn't aware of the huge gap between Austen's first three novels and her last, and when I discovered why I was outraged and indignant. Austen's parents, apparently on a whim, decided to sell up the Steventon parsonage where the family had grown up and where Jane had a settled writing routine, and moved themselves (and Jane) to Bath, which she loathed. Ten years were lost while the Austens flitted about between rented lodgings and visits to family, with Jane unable to recapture the stability she needed for her work. It wasn't until after Mr Austen's death that a more permanent home was found for Jane, her mother and sister at Chawton, where (you can almost hear the sigh of relief) she was able to pick up her pen once more.
It's infuriating to think how many novels we might have lost, thanks to the family's disregard for Jane's work, and bizarre to contemplate that, out of this large, colourful, active and largely successful family, it was Jane and her scribbles who have been remembered the longest, and don't seem likely to be forgotten any time soon.
Posted by A latte beckons at 2:53 PM