Are We Nearly There Yet? 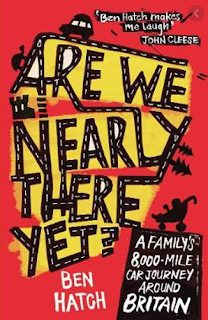 Ben Hatch's 2011 bestseller, Are We Nearly There Yet? arrived in a mystery box of books that Elder Daughter and I treated ourselves to earlier in lockdown. When I chose it from the box, I thought it might be a mildly diverting companion to Bill Bryson's Road to Little Dribbling, another amusing travelogue of Great Britain. But it proved to be much better than that.

Hatch's account of travelling round the UK with his wife and two kids (both under four) researching a family-friendly guidebook is definitely amusing. The usual tribulations of parenting young kids (lost toys, food meltdowns, poo and vomit) are added to a punishing timetable that can require up to four or five 'attractions' per day. Add to that some darker episodes, including a serious car accident, inexplicable pain and hospitalisation (Ben has a kidney stone), and raking over the marital coals as their travels lead them down memory lane to the sites of childhood holidays, first houses and first jobs.

But the real gravitas of this book is provided by the illness and death of Ben's father which unfolds over the months of their trip. Sir David Hatch joined the Cambridge Footlights at the same time as comic luminaries like John Cleese, Tim Brooke-Taylor and Graeme Garden, but he diverted into producing, becoming a BBC bigwig. Young Ben rebelled against his larger-than-life father, and his reflections on this rebellion and their ultimate gradual understanding (not explicit, because they are English, after all) is the most moving strand of this story.

Ben Hatch has also written several novels, one of which was published this year. With his impeccable comic timing, ear for dialogue and acute observational skills on display in this memoir, I'm interested to see what he's come up with.