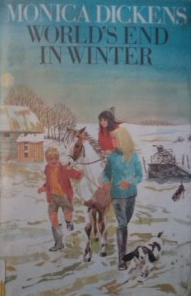 I like Monica Dickens' work but I didn't read her children's books when I was young, I was more of a Monica Edwards fan. However, in 1976 I did receive a Follyfoot annual, replete with colour photos lifted from the TV show, so I knew that existed (no TV in PNG and I'm not even sure if Follyfoot was screened in Australia). 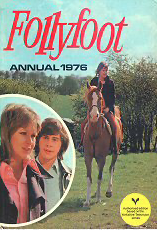 World's End in Winter is book three in the World's End series and I struggled a little in the beginning; Dickens can be an elliptical writer and she didn't drop many clues. For example, it took me a few pages to work out that John, Peter and Oliver are all horses, not children, and that Lester belonged to a different family. Gradually it became clear that World's End is a ramshackle household of four children, well-meaning but rather ineffectual parents, a kind of foster teen and a host of animals -- dogs, horses, cats. I can see that this would appeal strongly to a certain kind of child but I was not that child. When I was ten, I preferred animals neatly sequestered in stables and outside, not roaming around everywhere.

The plot focus of World's End in Winter lies with a child outside the family altogether -- nine year old Priscilla, confined to a wheelchair since a horse-riding accident two years before, and whose family seems to have given up on her rehabilitation. With encouragement from the World's End children, Priscilla learns to ride again and almost unwittingly regains her mobility. (Dickens dedicates the book to Riding for the Disabled.)

I thoroughly enjoyed Priscilla's horrible competitive parents who refuse to believe she can be helped; the high comedy episode when Priscilla nearly drowns when her wheelchair goes into the swimming pool (that sounds awful but it is very funny); and the underlying anxiety about scraping together enough money to keep this chaotic household functioning. Neighbours are kind, children are resourceful, the animals are all characters in their own right, and issues of life and death and responsibility are faced squarely. But I'm still not sure that World's End is a place I would like to live in.