A Time of Gifts 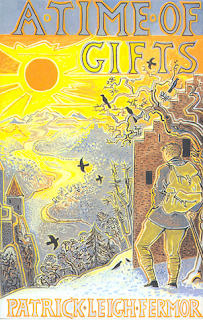 I had never read Patrick Leigh Fermor's classics of travel writing, A Time of Gifts and Between the Woods and the Water. Written when Fermor was in his sixties, the memoirs describe a journey he took in 1933/4 when he was just 18, when he decided to walk from the Hook of Holland all the way to Constantinople. This first volume ends when he reaches Budapest.

It took me a little while to settle into Fermor's flowery style:

Massed shadows, tilting down from the sierras, filled the bottom of the canyon. Here the Danube followed a winding corridor which expanded without warning to giant circular ballrooms and closed again just as abruptly; and for leagues on end this widening and shrinking ravine was empty of all but a cottage and a barn or two and a scattering of lonely towers and hermitages, all crumbling to fragments. They broke through the forest mass, disintegrating on vertiginous spikes of rock high overhead...

His evocative narrative takes us into a vanished world of clogs and swastikas (the Nazis had just taken power in Germany). I especially enjoyed Fermor's encounters with strangers and new friends, all vividly described, and the landscape and nature writing is beautiful -- surely Fermor created the template for literary travellers everywhere? I was less enthralled by long passages on obscure middle European history (something I know zero about, and alas was not inspired to explore further) and some of the raptures on architecture made my eyes glaze over.

It was astonishing to reflect that Fermor was only eighteen when he undertook this massive trek across Europe, and his confident, unconscious privilege glows from every page. He's prepared to rough it along the way, sleeping in barns and woods when the weather permits; but he's equally welcome as a guest in shabby schlosses, where threadbare nobles pour him brandy and expound on medieval history. He never seems to feel himself in danger, and while he is certainly grateful for the hospitality he finds almost everywhere, he also takes it for granted that he should be sheltered and fed. He only starts to wonder where he might sleep once darkness falls; as a slightly older female backpacker in Europe fifty years later, I was fretting about the next night's bed as soon as I opened my eyes in the morning. And while his pockets are also often close to empty, he is secure in the knowledge that there will be money waiting for him down the road. He sees and sympathises with the poverty around him, but he is just a visitor in the world of hunger and cold.

I wonder how the same journey might have been experienced by a woman, or indeed anyone but a young, healthy, middle class white man? Still, I'm glad Fermor could share his long, colourful walk with the rest of us.