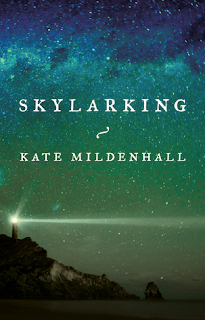 If Kate Mildenhall's 2016 novel Skylarking hadn't already been on my radar, I would have been seduced by this beautiful, understated cover. I think Skylarking was written as a young adult novel but it works equally well as an adult book.

Based on a true story, Skylarking tells a story of friendship, adolescence, intense attachment and ultimately tragedy between two teenage girls, Kate and Harriet, both daughters of keepers at a remote lighthouse in the 1880s. Harriet is a little older than Kate, a little less bold, a little more beautiful. But the girls' close bond is disrupted by the arrival of a man into their tight, isolated community.

Skylarking reflects on womanhood, growing up, and growing away, with a strong distinctive voice from the narrator Kate. It's a bit of a slow burn, but the final chapters of the book are particularly sensitively written, with a tantalising glimpse of Kate's later life. I have also heard great things about Kate Mildenhall's new novel, The Mother Fault, so I'm off to find that one!