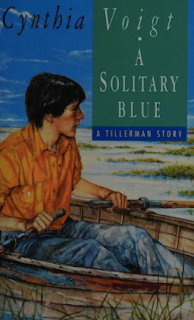 A Solitary Blue, Book 3 in Cynthia Voigt's Tillerman Saga, shifts the focus away from the Tillerman family and onto Dicey's friend/boyfriend Jeff Greene. All the Tillerman books seem to share a theme of loners learning to make connections, and Jeff is even more of a loner than Dicey -- she has her siblings, but he feels entirely alone. Abandoned by his mother, brought up by his loving but undemonstrative father, Jeff has learned to keep himself small and obedient out of fear that his father will abandon him too. When his mother reappears and turns the full beam of her charm and focussed attention on him, Jeff starts to believe he doesn't need his father after all. But beautiful Melody betrays him again, and Jeff has to learn to lean on the parent who has never let him down.

A Solitary Blue (the title refers to the heron who becomes Jeff's talisman) is painful to read, especially the early chapters. Jeff's wariness, his inner fears, his blossoming when he believes he is loved for the first time, and the agony of his mother's betrayal, are all exquisitely described. We've already met Jeff in Dicey's Song, where he seemed a self-contained but confident teenager; now we see how fragile that shell really is, and how close he comes to turning his back on Dicey when he suspects she might let him down too.

Again, it's the power of music and the beauty of the wild Chesapeake Bay that begins Jeff's healing, and it's connecting with the Tillerman family that continues it. This is a delicate, piercing portrait of childhood pain and the damage it leaves behind.