A Thing of Blood 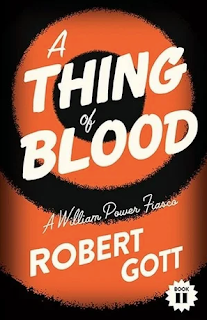 An impulse buy from Brotherhood Books, Robert Gott's A Thing of Blood turned out to not quite what I was expecting -- it's much funnier than I thought it would be, and not the kind of book I would normally pick up, which goes to show that impulse buys can be a good thing.

A Thing of Blood is the second 'William Power Fiasco', but I didn't feel I needed to have read the first volume to appreciate this novel. The element that most appealed to me was the setting: wartime Melbourne, 1942, a world of blackouts and austerity, American soldiers flooding the streets and a bohemian underlife. It's also a city riven by sectarian hostilities, Catholic v Protestant, a division that has now completely disappeared.

The second most appealing element was our narrator, Will Power, described on the back cover as 'the fatally over-confident hero.' As my own protagonists are usually have to fight to overcome crippling anxiety and self-doubt, it was quite refreshing to spend time with Will, an actor with no self-doubt whatsoever, despite other people telling him frequently how much he overestimates his own abilities.

The third element I enjoyed was Will's jaded, cynical, but enjoyably florid style of narration.

A chipped mug was placed before me containing a liquid that was wine only if that term is expanded to include sump oil. I took a small sip, and felt that if I had any more my teeth would dissolve.

There is a very high body count, lots of abducted and murdered ladies, and a lot of violence (most of it directed against Will himself). I loved that the action was centred around the streets of Parkville and North Carlton, an area with which I am very familiar. In fact I enjoyed Will's company so much (I definitely would not enjoy it in real life) that I immediately reserved the rest of Robert Gott's books from the library.