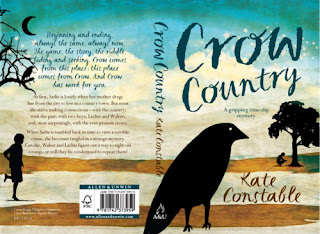 Beautiful Thing
I knew that the shortlists for APA Book Design Awards had been released, but I didn't realise until the weekend that Josh Durham had been nominated for Crow Country in the category of Best Designed Children's Fiction. Ngarra Murray drew the powerful crow on the cover, but Josh is responsible for the rest.

I reckon it's at least partly because of the crows that perch on the chapter numbers inside - clever Josh!

But I mean, come on -- isn't it just the most beautiful cover ever? (Okay, I may be slightly biased...)
Posted by A latte beckons at 9:21 AM