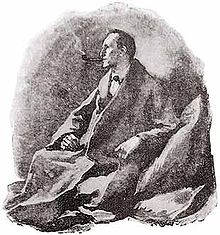 Sherlock Holmes was my first literary crush (I'm not counting Captain Cook (who was, after all, real) and his disturbing attractive white breeches in my Ladybird book of the same name).

At first glance there's not a lot to recommend Mr Holmes as an object of desire. There's the casual drug use, the total lack of interest in women (or anyone, really), the constant smoking, the insufferable ego, the chronic untidiness - he must have been a pain in the neck as a housemate.

Ah, but the searing brilliance of his mind makes up for everything. And we all know that the cold, distant types merely present a challenge - because if they give even the slightest hint that they care, that hint is worth infinitely more than some soppy emotional type declaring their undying love and throwing roses at you. As Dr Watson says,


It was worth a wound; it was worth many wounds; to know the depth of loyalty and love which lay behind that cold mask. The clear, hard eyes were dimmed for a moment, and the firm lips were shaking. For the one and only time I caught a glimpse of a great heart as well as of a great brain. All my years of humble but single-minded service culminated in that moment of revelation.

Swoon! I shudder to think of the effect that this must have had on my later romantic life. Indeed, my first real world sort-of relationship was with a boy who bore quite the resemblance to Holmes -- super-smart, but cold and distant. Which is why it was only a sort-of relationship. But ah, the arguments were fantastic.

In recent years I've enjoyed Laurie R. King's Mary Russell books, featuring Holmes as Mary's partner in crime-solving, and later, life. But fun as these books are, somehow I could never quite accept Sherlock as a married man, demonstrating ordinary marital passion. Also he is, you know, old. And Sherlock Holmes for me is like a Time Lord; he never ages.

But now I've been seduced by Sherlock Holmes all over again. Sherlock, the new adaptation by Steven Moffat and Mark Gatiss, with Benedict Cumberbatch as Holmes and Martin Freeman as Watson, is as genius as Sherlock himself. I've come to this much later than everyone else, I know, and I've only seen one episode so far, but that was enough for me to fall, and fall hard. Irresistible.
Posted by A latte beckons at 9:45 AM