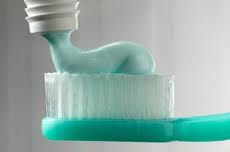 So I bought some toothpaste that was on special. And once we'd opened the box, it became clear that it was on special because it had a cap that has to be screwed on and off, rather than the squeezy nozzle that we've become used to.

No drama. But the girls gathered around to stare, open-mouthed with excitement. 'Look, look!' 'Oh, wow!' 'That is so cool!' 'That's awesome!'

They were just as thrilled by this retro toothpaste dispensing mechanism as I would be by a Bakelite wireless or a horseless carriage. It's a funny old world. So many things disappear before you even have a chance to realise that they've gone.

And because I'm starting to work on a book that is about, among other things, the vanishing ephemera of the past, it was a timely (see what I did there??) reminder that even the simplest things can be unexpectedly fascinating to kids.
Posted by A latte beckons at 9:22 AM