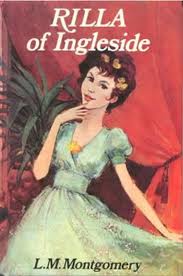 Alice and Evie go to bed with an audiobook every night. Don't blame me; their father can't fall asleep without the radio murmuring in his ear, so I reckon they got it from him. Anyway, this habit is all very well when we are on home turf, but it can pose problems when we're staying elsewhere.

This weekend we had a sleepover at a friends' place. Thank God for the iPad and the free Audiobooks app which we had spent some time exploring recently. There are literally hundreds of books available, though unfortunately many are read by narrators who are... well, less than perfect. The word wooden springs to mind. The only book we'd downloaded in its entirety, and which had an excellent reader, was Rilla of Ingleside by L.M. Montgomery, one of my absolute favourite childhood reads, and the source of all my early knowledge of World War I. Essentially it's the story of Anne (of Green Gables) and her family's experience of the Great War, focusing on her youngest daughter Rilla who comes of age during those agonising years, with friends, brothers and potential sweethearts marching off to war around her.

Well, we put on Rilla when the girls went to bed at about nine thirty. When Michael and I came to bed an hour later, Evie was asleep but Alice was still wide awake and listening. 'England has just declared war on Germany,' she hissed. I fell asleep with half an ear tuned to Rilla's tribulations, and whenever I rolled over in the night, I was dimly aware of the story murmuring away. We were all squished into one room and I couldn't reach the iPad without treading on everyone, so I let it run. Al must be asleep by now anyway, I thought lazily. When I woke up at about six, sunlight was seeping into the room and Rilla was still going! But by seven thirty, all was silent and Alice was fast asleep.

At half past ten, she was still dead to the world. When she finally surfaced, she confessed that she had stayed awake all night, listening to Rilla. And she really had.

'Oh, Mum, why did [spoiler spoiler]? It was so sad. And why did Jims' father have to come back? I didn't like Rilla's boyfriend at all... It was so scary when Jims was really sick and Mary saved his life. And Little Dog Monday, waiting for Jem! Oh, Mum...' - big contented sigh - '... what a great book!' She hadn't missed a minute.

And I know I'm a bad mother, letting my child stay awake till dawn listening to a novel, so she had big black rings under her eyes and could hardly speak for tiredness, but secretly, deep down inside, I didn't mind at all. So there.
Posted by A latte beckons at 8:34 AM