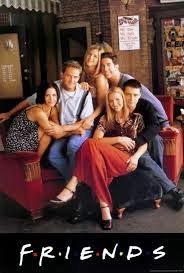 We watch a lot of Friends at our house. I was a fan the first time around (I especially got into the Chandler/Monica secret affair storyline, because at the time I was having a secret affair with my future husband, and I am a little bit Monica and he is a little bit Chandler.)

But Alice is a massive fan, and we have watched it on a loop approximately 4,782 times (seasons 3 -10 anyway, Gem doesn't seem to have the rights to the first two seasons, which is okay, cos they were not that great). There are many episodes we can almost quote by heart.

But recently I noticed something odd. In seasons 3 and 4, the Friends do quite a bit of reading. You often see Rachel or Monica in the coffee shop with a book. Rachel read Joan Didion at the beach. There were books lying around the apartments. Chandler bought a first edition of The Velveteen Rabbit for Joey's girlfriend (what a declaration of love!) One of my favourite episodes is the one where Rachel persuades Joey to read Little Women, then terrifies him, in the middle of an argument, by revealing, 'Beth dies!' She then takes it back, so he'll keep reading. But towards the end of the episode, Joey comes in, clutching the book. 'Beth's really sick... Jo's there, but I don't think there's much she can do...' Rachel hugs him, and says, 'Do you want me to put the book in the freezer?' (That's where Joey keeps the things that really frighten him.) I love that episode, and the fact that Beth doesn't actually die until Good Wives is neither here not there...

Why did the Friends stop reading?