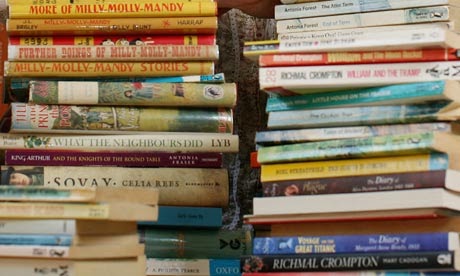 We have a read-aloud crisis looming. At the moment, I'm reading Prisoner of Azkaban to the girls for the second (third?) time, having rapidly polished off Philosopher's Stone and Chamber of Secrets. But as Evie pointed out, she is currently reading Goblet of Fire to herself, and they have both been listening to Order of the Phoenix and Half-Blood Prince on audiobook in bed. Evie doesn't want to read Deathly Hallows as she deems it 'too scary.' (She cried when Dumbledore died, even though she knew from watching the film that it was coming. 'But it's so much sadder in the book...!')

So the question arises: what next? There are any number of books that I'd love to read aloud to my daughters: Seven Little Australians, Cynthia Voigt's Homecoming, the Bastable books of E. Nesbit. But it's Evie's turn to choose, and that means it's probably going to be a Warriors book. The last time I tried reading aloud a Warriors book, it didn't end well. This particular volume featured a disfigured cat called Brightheart, and after a chapter where poor Brightheart was teased by the other cats, Alice fled the room, howling that she NEVER wanted to hear this book again EVER because she felt so sorry for Brightheart. In vain, Evie has reassured her that Brightheart goes on to live a long and happy life, and becomes an Immortal (I think). No dice. The Brightheart book is off the list.