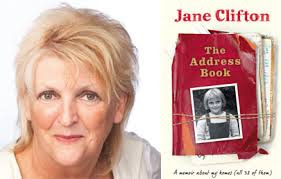 Jane Clifton's The Address Book caught my eye as I was browsing Brotherhood Books (okay, they had a sale on and I needed to beef up my order). I'd been looking out for this book for a couple years at the library but never tracked it down, so this was an excellent find.

Born in Gibraltar, an army brat whose family shifted between the UK, Germany and Malaysia before emigrating to Australia when Jane was 13, Clifton has lived in 32 homes. In this project, she reminisces about the period of her life spent at each address before revisiting the place as it is now, to see if memory matches reality, how much has changed, and whether any new memories are unearthed by the experience. Clifton's parents both died pretty young, so it's also a journey of discovery about her mum and dad and their sometimes turbulent relationship. The book falls roughly into two halves, with the second part covering numerous Melbourne addresses, mostly around the inner suburbs, familiar territory to me. This is a chatty, engaging memoir, though the section devoted to Clifton's early career as a muso/performer in 70s Melbourne contained a touch more detail than I really needed. But she also discusses her stint in Prisoner (Cell Block H for overseas viewers) and her life as a pop star (check out her biggest hit 'Girl on the Wall' on YouTube, she's right, someone really needs to cover this song, which is still all too relevant today and stands up surprisingly well).

As someone who has lived at twenty two addresses myself, I could relate to Clifton's pilgrimage, and I would love to do a journey like this myself. Though she's about ten years older than me, there was a certain amount of overlap in our Fitzroy/Carlton experiences and share house -- sorry, 'collective house' life. I hadn't realised that Clifton was part of Helen Garner's Monkey Grip crowd, and appears in the book under the name of Angela. Amusingly, when the movie was being cast, she decided to audition for the part of Angela but was told she couldn't sing or act well enough to play -- herself! Her part was ultimately taken by Chrissy Amphlett.

I seem to have been reading a lot about place and home this year. This book was a fun, often moving slant on the topic.

EDIT: Just as I finished writing this post, I happened to hear Greig Pickhaver on the radio talking about his life, and he was also a member of that gang, part of the Australian Performing Group that Clifton belonged to; she mentioned that he used to build loft beds for everyone! Another of those weird connections that so often seem to accompany the reading of a book...
Posted by A latte beckons at 10:35 AM