The Fairy Doll and Other Tales From The Dolls' House 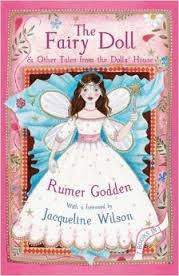 This ghastly cover masks a treasure: a collection of all Rumer Godden's doll stories. There are seven of them, some little more than short stories, some more substantial. This volume seems to be an attempt to bring Godden's beautiful, but old-fashioned, tales to a modern audience by wrapping them up in this non-threatening, girly package, no doubt designed to appeal to the Rainbow Fairies market (blech!) and with an admittedly sweet introduction from Jacqueline Wilson. Thrilled as I am to have seven Rumer Godden titles in one handy compendium, I'm not sure the gambit works.

The stories are all pretty gorgeous and I'd only read a couple of them before. The Story of Holly and Ivy was satisfyingly Christmassy, and Impunity Jane, in which a tiny doll becomes a member of a gang of adventurous boys, was unexpected (if gender-normative). But my two favourite books are the longer ones: Miss Happiness and Miss Flower, in which displaced Nona settles herself into a new home by making a house for two Japanese dolls; and its sequel, Little Plum, in which Nona's naughty cousin Belinda begins a war with the spoilt little girl next door who refuses to care for her own Japanese doll properly. The ingenuity with which the children make appropriate props and possessions for their dolls is truly inspiring -- pine needles for chopsticks, tiny painted scrolls, chopped thread for rice and so on. My daughter's favourite activity for a long time was making miniature homes for her collection of Sylvanian animals, or just tiny uninhabited rooms out of balsa wood, exquisitely furnished and decorated, and I think there is a particular class of child who relishes this kind of creation and would adore these stories. I know I did.