From The Outer: Footy Like You've Never Heard It 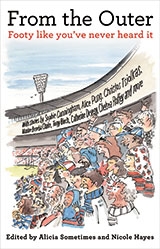 I got distracted again... My friend Margaret from the Convent book group was the first to alert me to this book, then I saw a review in the weekend paper, and next thing I knew it had arrived on my Kindle, seemingly by its own volition...

From the Outer is a collection of short pieces about AFL football, edited by Alicia Sometimes and Nicole Hayes, it includes chapters by Christos Tsiolkas, Angela Pippos, Alice Pung, and even football hater Cath Deveny, among many other voices -- some famous, some unknown. There are pieces by the first female umpire, a star player in the women's game, the founder of a LGBTI supporters group, disabled fans, many migrants who found that footy was a pathway to a sense of community in a strange land; fans who were born into a team, and fans who made a conscious choice; people who for many reasons speak 'from the outer', in the sense of being on the margins of society, and who (in most cases) experience the game from the outer, as spectators and supporters, rather than on the field. There are passionate fans, ambivalent spectators, those who have fallen in love with Aussie Rules and out again, some who can't stand the game (well, one). As Miriam Sved puts it: '...part of the appeal of footy, maybe of any sport, is stories,' and there are a multitude of stories here.

When I bought this book, it was just before Round 3. My beloved Western Bulldogs had started the year in a blur, blitzing their first two games to sit high atop the ladder. We were looking forward to meeting the all-conquering Hawthorn in our third game, to measure our team against the very best. I took the Kindle to the ground with me, to read it at half time.

By the time I finished reading it, round three was over. The Bulldogs lost -- by the slimmest of margins, and they dominated the Hawks for a good chunk of the game. We are the real deal. But the loss of the match was rendered almost irrelevant by a much worse blow -- an horrific injury to captain Bob Murphy, our club's beating heart, a footy romantic, a seemingly ageless veteran leading a team of young pups toward success... But Bob has done his knee. He won't play for the rest of the season. Given his age, he may decide never to play again.

There could hardly be a clearer demonstration of all the ways that footy can break your heart, or the sweet hopeful promise that lures you back in, despite the pain. Come back, Bob! It wouldn't be the same without you.