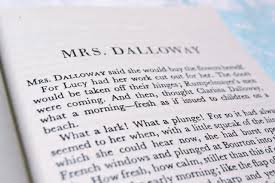 And after all, even if it were deeply nerdy to read the study notes alongside the novel, she didn't care a bit; for it only enriched her feeling for the story, made her notice details she had never seen before: the way each character was compared to a bird, for instance; the flow of the words, like a river, eddying and swirling one along so deliciously, so that one simply had to surrender, to lie back and submit, dreamily, like Ophelia.

And she remembered how much she had admired Virginia Woolf, years ago, when she was an undergraduate; had worshipped her, read every book she wrote, although a little frightened of her too, this sad goddess who had put stones in her pockets and walked into a river and drowned. And yet there was such a love of life in all those words, a grasping and a letting go, from moment to moment, the sunshine and the flowers and the desperation, the lovely girls and the pompous men; and she had wished that she could write like that!

It was the merest accident of hearing that podcast by Mervyn Bragg that had made her pull down the book from the shelf again; and she was glad, so glad! (And how odd it was, that she couldn't find anywhere a picture of her own novel's cover -- as if only one copy had ever been produced, especially for herself.) But was the gladness enough to make her re-read The Hours as well? No; there were limits to devotion; imitation was all very well, but in the end, there could be only one Virginia.

And there she was.
Posted by A latte beckons at 5:28 PM