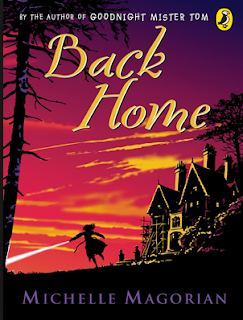 Back Home was published in 1984, and has twice been adapted for television, but I had never heard of it until someone mentioned it during the Trennels read-through of Antonia Forest's books (which I'm sure you're sick to death of me banging on about). I've been alerted to, and reminded of, lots of books via that read-through! So when I spotted this on Brotherhood Books, I nabbed it, and I'm very glad I did.

Back Home deals with an aspect of WWII that I hadn't given any thought to at all. Rusty (christened Virginia) was evacuated to America at the start of the war, as a timid seven year old, but at the start of the novel, she returns to England as a far more confident and exuberant twelve-year old. Her accent, speech and manners have been thoroughly Americanised; her clothes are bright, unlike the drab, rationed clothing of the English; her voice is too loud, her opinions too decided for her reserved English family's comfort. Poor Rusty soon finds herself exiled to a strict boarding-school, where she suffers not just the torments of inadequate heating, poor food, and petty rules, but the pain of bullying and social exclusion.

Although all does eventually end well, Rusty's plight is truly painful to read about. Her misery is almost unbearable at times. But it's an engaging story, vividly told. This novel brought the period of immediate post-war England strikingly to life, and provided an interesting counterpoint to the far more benign (though sometimes equally irrational) world of Kingscote, the Marlows' boarding-school, especially as the first book in the series, Autumn Term, was published in 1948.