Cosmos, Then and Now 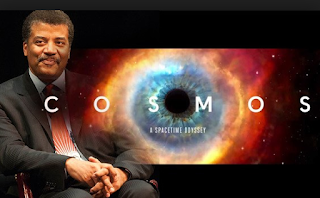 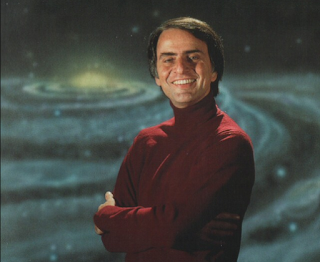 I was flicking through the channels last night when the screen filled with wheeling stars. 'Evie!' I yelled. 'Space!'

Evie loves space. She ran in to join me on the couch and I soon realised that we were watching the 2014 series of Cosmos, hosted by Neil deGrasse Tyson. The first episode had just begun, and Evie and I watched, entranced, as Tyson led us on a tour of our local galaxies, then the observable universe. Having explored the limits of space, he then conducted us on a nifty tour of time, that compressed the history of the cosmos to a single calendar year -- on this scale, the whole of human history takes place in the last few seconds of the last day of December. It really does blow your mind... Evie was transfixed.

During an ad break (they are useful sometimes) I told Evie that I'd been hooked on the first iteration of Cosmos, hosted by Carl Sagan, which was produced in 1980 when I was only a couple of years older than Evie is now. And I was just as thrilled and enchanted by that version of the show, even though the effects weren't nearly as spectacular. It's the big concepts that are the real source of the magic, not the special effects.

And when the show resumed after the break, Neil Tyson told a lovely story about meeting Carl Sagan in person, when he, Tyson, was a 17 year old kid from the Bronx who dreamed of becoming a scientist. Sagan made time to take him on a tour of his lab, signed a book for him, escorted him to the bus stop. It brought the show into a beautiful, human-scale circle.