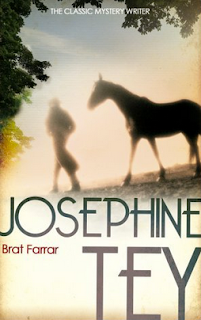 Oh dear, I'm so easily distracted... I bought this on impulse on the Kindle -- too hurriedly as it turns out, because if I'd investigated further I could have found an even cheaper version -- oh, well, serves me right for being impatient I guess!

My interest was piqued because I'd seen Brat Farrar mentioned in Antonia Forest (Ginty picks it up as 'an easy re-read', and I have a feeling it turns up somewhere else as well, but for the moment I can't think where... have to look out for it next time I read the Marlows books...). Published in 1949, it's a classic thriller -- a stranger arrives at the old country estate of Latchetts, claiming to be Patrick Ashby, the long-lost, presumed-dead-from-suicide twin of eldest son Simon. Certainly the two young men look very much alike. But Simon is not convinced -- and he has a very good reason not to believe 'Patrick's story... Can you guess what it might be?

I absolutely raced through this and thoroughly enjoyed it. It's a good old-fashioned thriller with a fabulous set-up. But what gave me the most fun was finding all the echoes of Forest's own books -- clearly this novel was on her mind when she wrote Falconer's Lure! The setting is very similar: there are two neighbouring estates, one solidly yeoman (ie Trennels), one more aristocratic (Mariot Chase). There are horses galore, and a set-piece local horse show toward the end of the book where villainy is exposed. One of the main characters is called Patrick. And there are animals called Regina and Buster (though in Falconer's Lure, Regina is a falcon, rather than a horse...)

I must admit I've been guilty of putting in little 'homages' of my own in the books I write, so it was rather lovely to see that Antonia Forest had done the same!