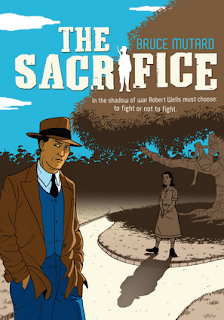 We are doing Graphic Novels next month in the Convent book group, and I had Bruce Mutard's The Sacrifice on my list as our junior fiction title. I'm not entirely sure how it got there, because this is definitely an adult novel. I had some trouble sourcing this book, and eventually borrowed it on Michael's card from the Moonee Ponds library (Kelvin was very helpful, thanks Kelvin!)

I really enjoyed the fact that this book was set in Melbourne. The graphics gave a vivid sense of the city in the late 30s and early 1940s, and the characters were of a demographic I haven't seen much of -- communists, pacifists, slightly bohemian types -- people who would probably have been my tribe if I'd been alive back then. The Sacrifice is part one of an ambitious project, the Robert Wells trilogy, with volumes two and three still to come, which will presumably chart Robert's experiences at war and afterwards; this book deals with his struggle to decide whether or not to enlist.

I have to admit that I took quite a while to get into The Sacrifice. If I hadn't had to read it for book group, I might have given up. The start was very dialogue heavy, as the characters discuss politics, religion, duty and ideology for page after page, before I'd managed to distinguish who they were! The story did pick up down the track, though, and by the end I was hooked into the story and the history. I still didn't feel particularly connected to the characters though. Maybe I need more practice with graphic novels as I do find them difficult! But I do admire the ambition of this project.