Enterprising Women: Television Fandom and the Creation of Popular Myth 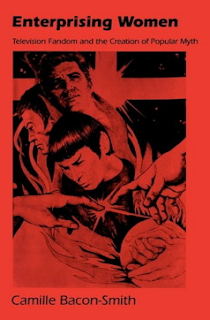 Perhaps not the best, but definitely one of the most interesting books I've read this year. I've been looking out for this for ages but I'd given up hope of ever finding it, it was so obscure -- an ethnographic study of fanfic writers from 1992 -- but miraculously, good old Brotherhood Books came through for me again! And wow, I'm so glad they did.

Camille Bacon-Smith spent eight years infiltrating the Star Trek fan fic community and Enterprising Women is the result of her study. (Apparently it was quite controversial on publication, as some of her informants felt they'd been misquoted or misunderstood.) It's quite an academic text, and in parts pretty dense with theory and analysis, not necessarily an easy read.

But there were so many fascinating aspects to this book, not least of which was the account of the daunting logistics of producing and distributing fan fiction and fan art before the internet came along, not to mention viewing 'source product' ie the original TV shows. Bacon-Smith spends many pages detailing the elaborate system of 'circles' and fanzines, with photocopied stories passing from hand to hand, and videotapes of videotapes copied in someone's lounge room and lent to friends -- stuff you can find now with the press of a key on YouTube, not to mention the millions of words of fanfic for every possible fandom, instantly accessible on your laptop screen.

Bacon-Smith's study deals principally with the Star Trek fandom, but also covered Blake's 7 and The Professionals, which was a pleasant surprise, as they were both shows I was obsessed with in the 1980s. And here I must confess my personal interest in this subject. I too was a fanfic writer, though I never heard the term and never shared my work with a living soul. In fact most of the time my narratives played out only inside my head and were only occasionally written down.

What interested me especially was the realisation that I had independently explored several common fanfic genres without knowing that they existed as a category: the Mary Sue story (featuring the idealised ingenue), the cross-universe story (mixing up Blake's 7 with Dr Who, or Dr Who with All Creatures Great and Small... ah, Tristan!), and the hurt-comfort story (which was so easy to act out when you were lying in bed at night before you fell asleep). Clearly there are specific psychological needs which are being met by these narratives, and while Bacon-Smith has her own theories, they didn't always completely convince me.

Anyway, there was lots of food for thought and memory here, and it's inspired me to think about maybe writing something about this important phase in my life, and what it meant to me.
Posted by A latte beckons at 4:44 PM