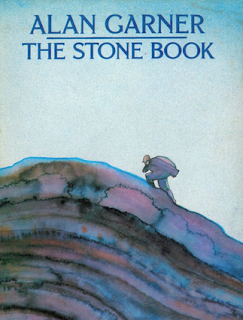 I spent last weekend in Castlemaine with seven wonderful women, celebrating the twentieth anniversary of our book group. (I've only been a member for about five years, but I was allowed to come along anyway!) We had a fabulous time, eating, drinking, wandering, chatting about life and books -- and of course we visited book shops.

Most of our book shop experiences were positive and enjoyable. But there was one book shop, which shall remain nameless, where the proprietor was weirdly hostile. The books (of which there were admittedly plenty) were higgeldy piggeldy, in tottering columns, so you couldn't actually access the shelves behind. Our polite enquiry ('are you open this afternoon?') was met with a snappish reply ('the hours are on the door'). A simple yes or no would have done the job...

ANYWAY during our brief visit, and despite the best efforts of the book seller to prevent me, I still managed to find three books that I wanted, including this slender volume, Alan Garner's The Stone Book, the first part of The Stone Book Quartet (I'm still looking for the other three books.)

Alan Garner's ability to pack in such vivid poetry and elliptical wisdom into so few pages leaves me breathless with admiration. Every word packs a punch; nothing is wasted. In The Stone Book, Mary longs for a book to carry in church like the other girls. But her stonemason father (echoes of William Golding's The Spire which I read a couple of months ago!) instead takes her to a hidden place underground, where she discovers a secret that moves her more profoundly than words.

I feel as if I've only had part of the story. Now I need the other three quarters of the whole.