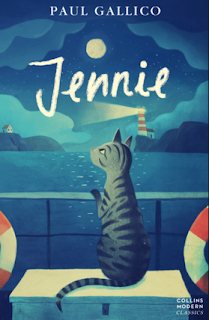 Paul Gallico's Jennie falls into the CATegory (see what I did there?) of books that I probably wouldn't have picked up if I didn't have to read it for book group. As a rule, I'm not a massive fan of animal books, as I may have mentioned a couple of hundred times before, so a book with a cat on the cover, however cute and wistful, wouldn't push my buttons.

Jennie was first published in 1950, and it shows. It's quite long, there are wince-inducing moments of racism and sexism, and the style is old-fashioned. It's the story of eight year old Peter, who loves cats and longs to own one, and who is magically transformed into a cat himself after being knocked down by a coal lorry (I told you it was old-fashioned!) He is befriended by a delightful, brave and loving little cat called Jennie, who guides and instructs him in all the skills he'll need to survive as a cat, and  the two share many adventures before their partnership comes to its inevitable end (spoilers: it's really sad!)

Gallico excels at describing the habits and disposition of cats -- apparently he owned 28 cats! -- and Jennie and Peter's adventures are mostly plausible and absorbing, but I couldn't help feeling some misgivings about their relationship. Jennie begins as a maternal figure, protecting and teaching the naive Peter. In the enjoyable middle section, they become true partners in adventure: taking a ship to Scotland, confronting fierce dogs and rats, getting trapped high on the girder of a bridge.

But towards the end of the book, their friendship takes a peculiar turn. Peter is enticed away by a 'charming' cat called Lulu (who I found merely slappable) and loses Jennie for a time; when they are reunited, their roles reverse and Peter becomes Jennie's protector and champion. We're told he's grown and matured into a strong, handsome tomcat, capable of fighting off Jennie's undesirable suitors, and the implication is that Peter is almost acting as Jennie's mate would do. But inside, he is still an eight year old boy, and the overall effect is slightly creepy.

Jennie has been reissued as a Collins Modern Classic. I hope it finds the audience it deserves.